We arrived on the banks at Providenciales around noon on April 19. After three hours of motoring and visual piloting to avoid coral heads, we dropped the hook about 2 miles SW of South Side Marina.

Skye promised to prepare dinner if I would clear in. The clearing in process can be somewhat daunting at times due to the unknowns and being at the mercy of the officials who will grant us entry to their country.

Skye prepped (lowered it from the davits, attached the outboard and pumped up the pontoons, replaced the paddles and gas tank) the dinghy while I collected the boat papers, passports and my wallet. Skye had confirmed that Customs' hours were to 4:30pm and I was ready to go at 3:55. The 2-mile dinghy ride we had compared to "Chat 'n Chill to the end of Monument" (George Town, Bahamas reference) turned out to be more like "the end of Monument to the end of Sand Dollar" and NOT parallel to the beach.

I was driving our 10-foot dinghy by myself into waves and 15-knot winds. In settled conditions, I am challenged to get up on a plane with my short arms and no weight at the front of the dinghy. I tried shimmying forward on the port pontoon to have my weight as far forward as possible. I nudged the gas tank forward in another attempt to balance the boat, but it kept sliding backwards. I realized quickly that I was riding in the wet (windward) side of the boat, so I carefully switched to sit on the starboard side to steer. The starboard pontoon was pretty soft so I felt the pressure of every wave. I debated pumping air into it, but was nervous about losing control of the dinghy.

Several times, when I tried to drive faster, I scared myself into thinking I nearly flipped the dinghy. My flotation device was an old waterlogged, ripped life jacket that we had been keeping as a "spare." I was wearing the kill cord, but didn't know what I would do if I ended up in the water, especially with an overturned dinghy. I was using my upper thigh muscles to steady myself and clenching my teeth out of fear. I was angry about how country rules that ONLY the captain (Skye and I are co-captains) can go ashore to clear in, can cause real risk to personal safety.

After about 40 minutes, I arrived at the calm and protected South Side Marina. Unsure about where to locate the dinghy dock, but also mindful that I was late for Customs, I hastened to tie off behind a skiff. With wobbly legs and feeling pretty shaken, I approached the marina office and opened the door to step inside. I was greeted pleasantly by Nevarde, who supplied me with a welcome kit of forms, magazines and brochures. She told me that a Customs official would meet me soon under the gazebo.

I sat at the gazebo table to complete my paperwork, then waited ... and waited ... and waited for the Customs official. Delthea arrived around 5:30 to clear me in. Then I still needed to wait for Immigration to stamp our passports. Nevarde called Immigration but was unable to get through.
I tried to radio Singing Frog to let my family know I was ok. When, after several attempts, there was nothing heard, I asked to borrow the marina's radio. I tried VHF 5 and 16, but still had no response from our boat. I later learned that they were hearing me, but I could not hear them. Occasionally, I heard static on Channel 5, but never anything discernible. As daylight disappeared, imaginations wee active on Singing Frog.

Around 6:00, Bob (the marina owner) was able to reach Daniel from Immigration, who said he would come to the marina, so I resolved to keep waiting to be properly cleared in. I purchased a courtesy flag from the marina office and I was feeling encouraged that I would soon finish and return to the boat going downwind before dark (I hadn't brought a light).

As time went by and the sun was going down with no sign of Daniel, I finally decided to return to the boat and come back the next morning to finish clearing in. As I was bailing the dinghy (yes, we have a small water leak), other boaters called to me that Immigration had arrived. They invited me to go first, but Daniel wanted to speak first to the people who would be leaving early the next morning. He explained to them that he didn't have his equipment with him and arranged to return in the morning to stamp their passports. I interjected to explain that I would be back around 11:30 the next morning, then rushed to get home to Singing Frog.

Leaving the flat channel to the marina, I accelerated to plane and was able to maintain this for most of the way back to our boat. I was again motivated by sheer fear, especially as the skies were darkening fast and coral heads were appearing near the surface on my route home. The drive home took about 20 minutes and I arrived, shaking and tense, to a fretful crew. Austin met me at the swim platform and took the dinghy painter to hold me to the boat. He helped me off after I placed the radio and my bag of documents down at his feet. He hugged me tight for a long time and I couldn't stop the tears from coming.

Skye had paddled over to a neighbouring boat, "Hullabaloo," to ask if he could borrow their dinghy to look for me. I heard Singing Frog being hailed on the radio and Austin went down to let Skye and Hullabaloo know that I had returned safely. 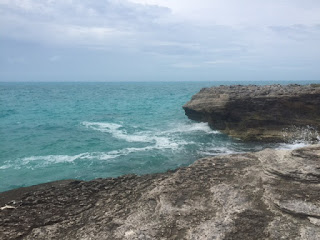 Lessons learned:
1.     Consider bringing another crew member ashore to balance the dinghy if the distance is far in rough conditions
2.     Be alert to the dangers of being a woman alone in (potentially) a poor country. Bring Austin, Aidan or Skye with me.
3.     Wear a life jacket for long dinghy rides alone
4.     Carry a flashlight
5.     Whenever possible, call ahead to arrange to meet with Customs & Immigration