Our arrival in St. Vincent

Posted by skyec No comments:

Photos from the first couple days A quick update from St. vincent. The big news is that we made it through! Hurricane Tomas put on quite a show and lucky for us there wasn’t much damage in our immediate area. We were without power for about 10hours, basically the duration of the storm. The hotel we are staying at is on the water close to Young Island but seemed fairly protected as the waves only got up to a little over a meter (this bay is nearly always calm so there was a bit of erosion today). A few trees close by blew over but nine were are or threatening.

The hotel staff were very friendly and helpful though food selection was understandably very limited. The boys just aren’t used to eating survival rations (A1 was quite sad when he found out there wouldn’t be cooked food for dinner). There were several other groups of sailors stranded here. Most were just about to start their vacations but one family was stuck trying to go home. A small world moment but I’d say most of the people staying here right now come from within a hundred Kms of each other. One couple is from Comox and another group is from Port Townsend. Add to that the sailing instructor who works for Barefoot who is from Bellingham and we have ourselves a big PNW get together!

We won’t find out until tomorrow how well the boat did through all of this. It was moored on hurricane mooring, extra lines and anchors. I hope that was enough.

The trip down was OK. We had a piece of baggage go missing for a night but they managed to find it in Thunder Bay and get it to Toronto in time for our morning flight to Barbados. Liat was an hour and a half late which was expected (they were 2.5 hours late the last time we did this trip) but they did manage to get all our 9 bags (2 over 50 pounds) to St. Vincent … eventually. Other than that it was what you’d expect flying for two days with an overnight stopover, through 3 countries, 3 immigration checks (Barbados checks you both incoming and outgoing), 3 security checkpoints with 14 bags and a violin with 3 kids, one under 3 :)

The boys are really enjoying themselves. Things started to look up even before we touched down in Barbados. A1 was at a window seat as we landed and was impressed by the amount of green on the island and the turquoise water. Once on the ground they got a kick out of being in strong wind but not being cold (the early effects of Tomas were starting to be felt). While waiting for our connecting flight there was a squall that surprised the boys with the sheer amount of water that falls in such a short time (and with how warm it was). A1 was drumming on the benches and was being encouraged by the adults around him. “He’s playing music!” exclaimed one of the smiling people when we went to check on things. And then they had their “best pizza ever” for dinner when we arrived. People down here really enjoy children and treat them very well. The boys have been picking up on this and are obviously liking it. When we woke this morning the three boys got to linger around in the big hammocks outside our room and talk (and sing) to the parrot. Yup, they are enjoying themselves and we haven’t even gone to a beach yet!

At one low point for A2, when he was convinced he wouldn’t like his sandwich, A1 tried to encourage him by saying, “Have you noticed, so far on this trip, Aidan, things have turned out better than expected? In fact, way better than expected.” Thatta boy!
Posted by skyec No comments: 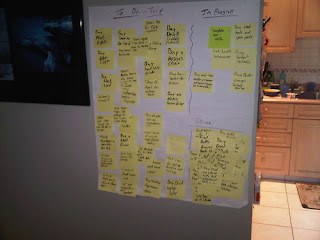 We've hit a turning point. The departure to do list is starting to shrink. Now to get all those boxes filling the house stored away.

Posted by skyec No comments: