On Friday November 20th we boarded a plane to Montreal. For the next three weeks we will be touring Montreal, Quebec City (and area), Ottawa and Toronto before returning to our boat.

It's three and a half days into our visit to Montreal and the city is amazing. And there is still so much to do and see. The temperatures are hovering right around freezing with a dusting of snow this morning. It's cold but still a very walkable city. While I'm sure things get rather messy in a few weeks when the first serious snow storm blows in, for now, the forecast looks mostly clear.
Our funky-modern AirBnB is just off of St. Catherine St (Rue Ste Catherine). Much to our great, but pleasant, surprise, we woke the first morning to banging and drumming, horns and whistles. It turns out that the annual Santa Claus parade was just getting underway and not 1/2 a block from us! So many vibrant people out to see the performers. 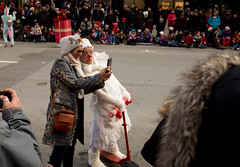 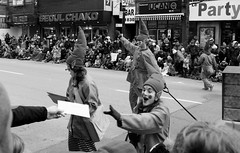